posted by: The Owner in Phobias 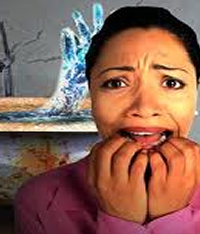 Ablutophobia is a pretty rare phobia and characterized by an un-natural aversion to washing. Ablutophobia is more often seen in Women and Children but very rarely in grown men.

As thought you may be able to imagine, this is an antisocial disorder

Ablutere is Latin for `to wash off` and the treatment for Ablutophobia is very similar to normal phobias where the need to find and deal with the deep cause is desired.

Horror films have been known to bring on this Phobia but normally the cause is from when people were children and they avoided bath time like most other people.
For some people they seem to just continue with this bath or shower avoidance into later life until it becomes `normal` for them.

We have an excellent success rate are very quickly becoming well known.

We have very strong connections with highly trained professionals that we can call on any time.

We can help you do direct billing with lots of insurance companys, cash payments or we can help you negotiate to work out a payment plan.

Local Rehabs treats all different kinds of phobias including Ablutopobia..

Although Ablutophobia is not a very common phobia we have actually treat at least one person with it in the last 10 year of business..